If you could have any superpower, what would it be? Invisibility? The ability to fly? Have stretchy limbs? How ‘bout heal yourself?

Well then, run at an incredible speed to the nearest costume store because recent research shows that we do—in a sense—have the ability to heal ourselves. 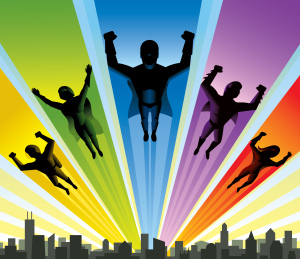 Earlier this week, an article from The Associated Press explained how a man’s broken ankle was healed using bone marrow from his own pelvic bone. Wow. But is this man uniquely blessed with superhuman power?

In reality it’s the diligent work of biomedical researchers that has made such a procedure possible. And it has implications on the adult vs. embryonic stem cell showdown.

The latter has long been considered the more promising between the two because it’s only during the embryonic stage that blastomeres are present. Unlike other types of stem cells, blastomeres have the capacity to develop into all tissue types found with the human body. (Think microscopic Mystiques shape shifting into various cells.)

Adult stem cells are being studied in people who suffer from multiple sclerosis, heart attacks, and diabetes. Some early results suggest stem cells can help some patients avoid leg amputation. Recently, researchers reported they had restored vision to patients whose eyes were damaged from chemicals. Apart from these efforts, transplants of adult stem cells have become a standard lifesaving therapy for perhaps hundreds of thousands of people with leukemia, lymphoma and other blood diseases.

Ritter goes on to quote Rocky Tuan of the University of Pittsburgh, “That gives adult stem cells really a very interesting and potent quality that embryonic stem cells do not have.”

Nearly a decade ago, RTB biochemist Fazale Rana hinted at the same thing. In a 2001 article for Facts for Faith he wrote, “Until now, developmental biology has regarded adult stem cells as having only restricted capability to develop into specific tissue types. Scientists have viewed cell differentiation as mostly irreversible. However, current work suggests that this paradigm will soon be overthrown.”

Studies have shown that some types of ASCs can be used to treat diseases and injuries that the biomedical research community thought could only be addressed using ESCs. ASCs pose no ethical problems because these cells are isolated harmlessly from adult tissues. ASCs raise no concerns about rejection because the donor and recipient are one and the same. In fact, ASCs are now being evaluated in clinical studies, and some promising preliminary results are already in hand.

Further, in an interview from 2009, Fuz explains that “with the advances in adult stem cell research, for example, we can develop treatments and therapies for many debilitating diseases and injuries without compromising the dignity of human life.

Though we might not have access to the Hall of Justice, science may continue to find innovative ways in which we can heal ourselves. The recent article by Ritter serves as yet another example of the advances made in adult stem cell research and offers hope of an ethical solution to embryonic stem cell research.

Since 2001, Fuz has offered numerous other resources on the work and controversy behind stem cell research. Here are just a few:

For deeper thought into the question of superpowers, take a listen to episode 178 of This American Life.

GIVEAWAY TIME: What superpower would you choose? Let us know. The first 20 commenters to the WordPress blog will receive a free copy of Fazale Rana’s audio message “Making Sense of Stem Cell’s.”

Automated Synthesis of Sugars Sweetens the Case for Intelligent Design

When it comes to sugars, most people want to find ways to break them down. But there are a few scientists who want to...
Biotechnology

A Case for Intelligent Design, Part 1 (of 4)

The SETI (Search for Extraterrestrial Intelligence) community has defined a Wow! signal as a transmission that is so unusual in its characteristics as to...
Evolution