Just when you think you’ve got something all figured out, it changes. For instance a few decades ago cassettes were the business—portable, durable, and mix-tape friendly. Though CDs were around, they hadn’t yet gained much ground. But over time the world grew accustomed to the new format and cassettes died a slow but inevitable death. And now MP3s put CDs on the endangered list.

Whether it’s in consumer electronics or nature or worldviews, change is inevitable. And when it happens, it disrupts everything (for better or worse).

Christianity is certainly not immune to change nor to the disruption that precedes and succeeds it. In the seventeenth century, the controversy du jour was heliocentricism (the idea that the Sun, not Earth, is at the center of our galaxy) because it conflicted with the church’s then-understanding of Psalm 104:5 (thought to support geocentricism). It wasn’t until the eighteenth century that the contentious view was officially accepted by the church.

Today, the church is facing another challenge—or opportunity—for change. 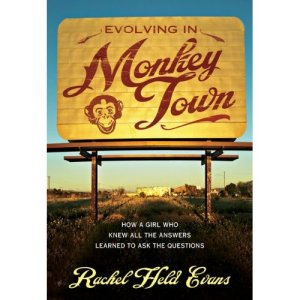 In the just-released book Evolving in Monkey Town, author Rachel Held Evansuses her own staccato-rhythmed journey to shed light on faith-threatening issues that quietly plague many believers.

Growing up in Dayton, Tennessee—a town famous for the creation vs. evolution showdown that was the Scopes “Monkey” Trial—Evans seemed destined to expose (once again) believers’ fears that Christianity is “one scientific discovery or cultural shift or difficult theological question away from extinction.”

Like many Bible believers, Evans held the view that the creation days in Genesis 1 were six 24-hour days—and by held, I mean she wielded this theory like a mallet over a plastic mole. Though she was aware of the evidence to support a 14-billion-year-old cosmos, she couldn’t comprehend why God would take so long to “get to the point.”

Evans ultimately embraced theistic evolution, a viewpoint that differs from old-earth creation on some significant points. But what she discovered is that, just as in Galileo’s day, the church must be willing to let go of false fundamentals (such as the age of the Earth) in order to survive and thrive.

Christians today might find themselves clinging to nonessential ideologies, unwilling or unsure of how to set them aside. It’s no wonder, then, that skeptics and seekers have difficulty swallowing a faith that even believers find askew against the current culture and science. But again, it’s not the faith (or Bible) that changes, just our understanding of it.

Perhaps the most valuable point to take away from Evans’ book is this: “When the gospel gets all entangled with extras, dangerous ultimatums threaten to take it down with them. The yoke gets too heavy and we stumble beneath it.”

In this we can agree: False fundamentals cloud the essential doctrines.* There will continue to be distinct differences among denominations and among individual believers. Still, as Evans points out, “this doesn’t diminish the beauty and power of the Bible but rather enhances it and gives Christians something to talk about.”

Speaking of, there will be plenty to talk about in my next entry where I’ll address how the old-earth perspective differs from theistic evolution. In the meantime (and, if you’re a fan of mixes) check out Evans’ “Monkey Town” playlist.

To learn more about the testing worldview perspectives, see Kenneth Richard Samples’ A World of Difference. And for answers to the 20 toughest faith questions, see Samples’ Without a Doubt.

An experiment performed by one British and three Hungarian biologists provides yet more scientific evidence that certain non-human animals were designed in advance to...
Biology

On one hand, it appeared to be nothing more than a harmless publicity stunt. On October 25, 2017, Saudi Arabia granted Sophia—a lifelike robot,...
Creation Model

Recent scientific discoveries have opened up a whole new world where mere humans may be able to alter the genetic makeup of any organism...
Biology