It’s a peculiar thing to be surrounded by people and feel all alone. Yet such was my predicament last week. With a few hours to spare before IAM’s Encounter 11 began, I wandered, in solitude, the streets of Tribeca. The city’s pace and air brisk, as I, shivery and slow, sought adventure in this foreign land. 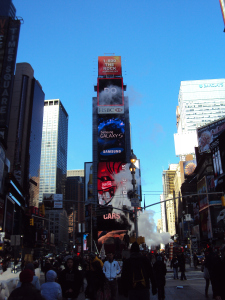 First oblivious to the mystique of their local lingo, my gracious guides then spared a New York minute to translate their words into a language I could understand. And off I went to experience my first ride on a NYC subway.

The few stops between my starting point and destination allowed time for me to think of how the “languages” we speak might inadvertently isolate others.

For instance, natives to the science-faith discussion may use terms like anthropic principle, faint sun paradox, and macroevolution with as much ease as everyday words like this, that, and the other. Newcomers hoping to join in the conversation might just as soon stay home than tread wearily through unfamiliar territory.

It reminds me of Stranger in a Strange Land, where a man from Mars arrives on Earth with no knowledge of Earth’s culture and language. Jubal, a native of Earth, attempts to help the man from Mars understand one component of human culture:

IAM’s Encounter 11 discussed this notion of art that favors mystique over craft. Their response is rather to create art that goes beyond mere self-expression—art that is generative. Moreover, by integrating art with faith, those involved with this movement hope to inspire others to create a language that brings people back home to the original Artist.

In a similar vein, scholars here at RTB hope to shed light on how the integration of science and faith brings people (back) to the original Creator. Though he is a bit of a joker, biochemist Fuz Rana does indeed want to explain the art of science-faith matters in a language comprehensible for those sans PhDs.

For example, in a recent episode of Science News Flash, Fuz responds to a New York Times blog article about how in the span of fifty years, a fish has evolved resistance to toxins polluting its Hudson River home. “If evolution can make it there, it can make it anywhere,” Fuz teases. Yet he continues, explaining that this discovery could be taken as open and shut evidence that evolution is a fact. Finally, he offers insight as to how we, as Christians, might think about studies like the one in the Hudson River.

From Fuz’s perspective, this discovery is in effect a mutation that led to the loss of function and this loss of function is what allows resistance to happen. “So it’s a burnt bridge mutation,” he explains, “it’s not an evolutionary advance but really a loss of function that just turns out to be advantageous in an extremely toxic environment.”

He also adds that the scale in which the process is happening is critical.

Evidence has to match the scale of the process. You’ve got evidence here for microevolution. It’s illegitimate to say that this evidence is applicable to macroevolutionary changes because the changes you’re looking at are on a different type of timescale. Just because these changes can happen rapidly doesn’t mean that they can be sustained over significant periods of time to create entirely new organisms.

Though not in response to the study, presenters at Encounter 11 also mentioned the Hudson River, comparing this literal “estuary” (where the tide meets the current of a stream) to the cultural estuaries of art.

The creation of a healthy ecosystem of culture will depend on the creation, success, and presentation of cultural estuaries.

Perhaps the same could be said about science. The hope is that the efforts made here at RTB will serve as a tide of faith meeting the stream of science.

In a classic scene from Alice in Wonderland, the story’s heroine informs the White Queen, “One can’t believe impossible things,” to which, the White...
Biology

Nobody likes to be interrupted when they are talking. It feels disrespectful and can be frustrating. Interruptions derail the flow of a conversation.
Biology

I wouldn’t classify it as a bucket-list experience, but it was off-the-charts cool to see a duck-billed platypus up close a few years ago...
Evolution