Did fighting push early humans to stand upright? According to a study by researcher David Carrier, yes.

He states in a recent MSNBC article that “selection for aggressive performance and aggressive behavior could have been one of the factors that led to the evolution of bipedalism.” 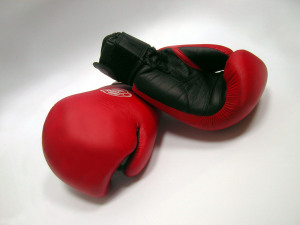 Carrier tested his hypothesis by having human participants strike a pendulum transducer from “quadrupedal” and bipedal postures, then measuring the force and energy produced. (Based on the figure, the striking motion looks a lot like what a person would do when playing Wii Sports’ boxing.) It turns out that standing (rather than being on all fours) allows the fighter to punch about 40 to 50 percent harder. Carrier suggests that this advantage is what caused the transition from knuckle walking to giving knuckle sandwiches.

But others say them’s fightin’ words. Herman Pontzer, a researcher at Washington University who was not involved in the study, explains:

If chimpanzees and other quadrupeds can and do adopt bipedal postures to fight—and chimpanzees do this with some ferocity—than [sic] why would evolution favor a radical change in anatomy?

Biochemist Fuz Rana, author of Creating Life in the Lab and Who Was Adam?, stepped into the ring (i.e., the Science News Flash recording studio) to offer a response:

It looks as if chimps, gorillas…even the peace-loving bonobos are able to effectively stand erect temporarily to deliver blows that would allow them to win male-male competition. And so if that’s the case there’s no evolutionary motivation for them to permanently stand erect…We get this imagery of an ape just standing erect and suddenly with just a few minor adjustments to its biology is able to move around in a bipedal manner. That’s not true at all.

According to Fuz, the number of anatomical changes that must occur to go from knuckle-walking to, uh, walking-walking (bipedalism) are “incredibly extensive.” He lists just a few of these changes:

When one considers the astounding number of anatomical changes required, the sudden and sophisticated emergence of bipedalism just doesn’t make sense from an evolutionary perspective. Yet, as Fuz points out, these characteristics “perfectly match the pattern special creation would predict.”

Carriers’ study provides more evidence—consistent with the fossil record—that when it comes to bipedalism, hominids are no match for humans.

“The Leap to Two Feet: The Sudden Appearance of Bipedalism”

Adam and Eve: A Primordial Pair or a Population?

Today, one of the central science-faith issues facing evangelical Christianity centers around the historicity of Adam and Eve. Did Adam and Eve actually exist?...
Human Origins & Anthropology

A recent study carried out by an international team of researchers provides powerful evidence for the veracity of the biblical account of the descent...
Human Origins & Anthropology

In the Habitable Zone But With No Water

Planets around M dwarf stars have generated a lot of interest lately—especially with the recent discovery of an earth-mass planet in the region where...
Human Origins & Anthropology