Why people are compelled to couple a hopeful word like “Spring” with a laborious task like “cleaning” I’ll never know. But alas, it’s time once again to hear that oxymoronic phrase and perhaps even (gulp) consider partaking in the dreadful suggestion. 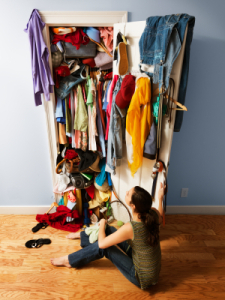 In a forthcoming TNRTB series on the topic, Patricia explains that “scientists steadily and continually report newly discovered functions for supposed ‘junk’ DNA.” One such finding indicates that Alu elements (a type of so-called “junk DNA”) play a variety of roles in regulating the expression of the genes in a cell by influencing transcription, translation, and the placement of nucleosomes along the DNA. With this and other findings in mind, she adds, “It looks like using ‘junk DNA’ as an argument for evolution is a thing of the past.”

Patricia isn’t the only one hoping to nudge the junk-DNA argument a bit closer to the toss pile. Biochemist Fazale Rana has been eyeing that argument for years.

Back in 2007 Fuz reported that “Evolutionary biologists consider the existence of ‘junk’ DNA as one of the most potent pieces of evidence for biological evolution.” He explains their reasoning,

Evolutionists…highlight the fact that in many instances identical (or nearly identical) segments of junk DNA appear in a wide range of related organisms. Frequently the identical junk DNA segments reside in corresponding locations in these genomes. For evolutionists, this clearly indicates that these organisms shared a common ancestor. Accordingly, the junk DNA segment arose prior to the time that the organisms diverged from their shared evolutionary ancestor. Evolutionists ask, “Why would a Creator purposely introduce nonfunctional, junk DNA at the exact location in the genomes of different, but seemingly related, organisms?”

Even back then evidence had already begun accumulating to show that junk (or noncoding) DNA is not, in fact, useless. After surveying 10,402 sequences in the human genome, researchers noted in 2006 that transposable elements or TEs (another type of “junk DNA) control the activity of a particular type of protein called transcription factors. Fuz tells me that these proteins regulate gene expression and control developmental genes. Basically, “These genes regulate the developmental process as organisms transform from an embryo into an adult form.” Hardly junk.

In other words, like our ill-fitting pants of yesteryear (we all got ‘em), it’s high time to get rid of the argument that so-called junk DNA is evidence for evolution.

Check out a recent episode of Science News Flash in which Dr. Fanning discusses how Junk DNA Shows Evidence for Biochemical Design Once Again. Also check out The Cell’s Design andWho Was Adam?by Fazale Rana.

Here are more examples of functional “junk” (or noncoding) DNA:

Functional DNA amid Piles of Junk

Sometimes my daughters' bedrooms are unbelievably messy. Junk everywhere. It often looks like a clothes bomb detonated. I have no idea how they can...
Biochemistry

A Critical Reflection on Adam and the Genome, Part 2

When I began college, I signed up for a premed major but quickly changed my course of study after my first biology class. Biology...
Biology