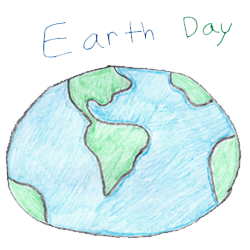 According to my hilarious tear-off calendar, this Sunday is Earth Day. Surprise! Though some (including yours truly) might typically be inclined to shrug it off as just another day, we might want to reconsider. Earth Day has become the “largest secular civic event in the world,” with more than one billion people participating in Earth Day activities. A pretty spectacular feat considering the event has been in existence for just over 40 years.

The Earth Day Network, an organization that grew out of the first Earth Day, claims to be a global leader in promoting environmental education and green schools. That can’t be all bad, can it? Considering Earth is where we keep all our stuff, it seems reasonable that we might want to clean it up a bit. Still, some Christians are leery of that other E-word (environmentalism), which gets wrapped up with Earth Day. The concern for some is that it’s all too easy for us to move from caring for the environment (creation) to worshiping it.

On the flipside, our skeptical friends might charge Christians (and theists in general) with having an apathetic attitude about our planet’s condition. The complaint is summed up in an e-card I stumbled upon: “I wish more people cared about Earth as much as they cared about who they believe created it.” Ouch.

Thankfully, there’s an alternative to creation worship and creation apathy, and the environmentally conscious (Christian or otherwise) don’t have to look too far to find it.

In his own article about Earth Day, Hugh Ross suggests that “the first place Earth Day celebrants and environmental agencies should go for guidance on how to best care for Earth is the book of Job.”

For example, Job 38 describes how God designed the precipitation of water (rain, snow, hail, dew). This knowledge implies that humans should address climate crises by first correcting the damage we have brought upon Earth’s precipitation patterns.

The most astonishing examples of human disturbance of rainfall patterns include the recent growth in the size of the Sahara and Gobi Deserts. Today, the Sahara is ten times the size it was during the Roman era. The Gobi is three times bigger. Both deserts were enlarged as humans stripped the desert boundaries of vegetation.

One creative response to the threat of global warming, Hugh suggests, is for replanting the desertified area of the Sahara and Gobi Deserts. “In so doing,” he adds, “the Sahara and Gobi regions could once again become breadbaskets for Africa, Europe, and China. At the same time, all that vegetation would soak up huge quantities of greenhouse gases and, thus, help cool the planet.”

Hugh further points out that creation accounts in Job (and elsewhere) remind us that creation care (environmentalism, minus the political and worldview orientation) is a biblical mandate. In other words, “God’s people, most of all, should be concerned about taking excellent care of the natural world.”

What he suggests is that we celebrate Earth Day by reading through all the creation accounts in Job. I’d suggest we also consider how we can better fulfill our role to care for “the fish in the sea, the birds in the air, the cattle, and, yes, Earth itself, and every animal that moves on the face of Earth.” And then take action.

The Book of Job is chock-full of insightful information about today’s environmental questions. Delve deeper into this topic with Hugh’s latest book, Hidden Treasures in the Book of Job.

*Illustration by Khristian and Isabella

A Conversation on the Life of the Mind, Part 1

The motto of the United Negro College Fund is “A mind is a terrible thing to waste.” This is an excellent observation, but according...
Theology

Not only is the Bible filled with the fundamentals of science, but it is as much as 3,000 years ahead of its time. The...
Theology