“Sure Superman was faster than a speeding bullet. But could he fly fast enough to reverse the Earth’s rotation and travel back in time?” 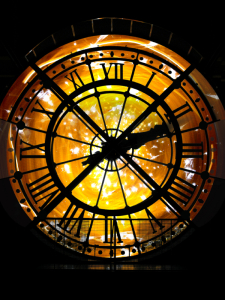 If this sounds like the beginning of another lunchtime conversation from RTB’s comic book fans, think again. The hypothetical question, posed in astrophysicist Jeff Zweerink’s article “Faster than the Speed of Light,” was in response to scientists’ claim of discovering faster-than-the-speed-of-light neutrinos.

Jeff explains that researchers at the CERN laboratory in Switzerland produced and beamed neutrinos (difficult-to-detect subatomic particles) toward a neutrino detector in Italy. They then measured how quickly the neutrinos traveled from point A (Switzerland) to point B (Italy)—some 460 miles. What they discovered is that the neutrinos appeared to arrive 60 nanoseconds faster than a beam of light would get there.

To some, this discovery served as the flux capacitor to Doc Brown’s DeLorean—it’s what makes time travel possible.

Why on earth (or on Krypton, for that matter) would 60 nanoseconds impact the age-old question of whether time travel is possible? Because, according to Jeff, “If the [CERN laboratory] result withstands scientific scrutiny it would undermine one key tenet of Albert Einstein’s almost-universally-accepted general relativity.”

Jeff reported in the latest issue of New Reasons to Believe (see “Not-So-Fast Neutrinos,” vol. 4, no. 2) that further research casts doubt on the claim of superluminal (faster-than-light) neutrinos. In one such experiment scientists using a different timing technique found that the neutrinos travel at slightly less than the speed of light. Other findings claim the initial report was flawed because of issues with clock synchronization and improperly seated cables.

In other words, it looks like Einstein’s theory of relativity remains unscathed. You might wonder what all this has to do with the Christian faith; I’ve heard Hugh explain it as follows:

It’s important for the Christian because the theory of relativity establishes that indeed the universe has a beginning, it’s not just a beginning of matter and energy but a beginning of space and time, which means the cause of the universe must be an entity or a being beyond space and time. And this is really what separates Christianity from, say, the Eastern religions, which state that god or gods or cosmic forces create within space and time that eternally exist. The Bible says the opposite. And now we have an additional piece of proof, in addition to the ones we already have, that establishes that worldview perspective is correct.

Though I wouldn’t mind a DeLorean, it looks like the possibility of time travel comes up short while Einstein’s theory (and its implications for the Christian faith) takes the win.

Neutrinos Not Faster Than Light After All

The Dynamics of Dating

by Dr. Roger C. Wiens Bewildered, Janet watches her son gaze in awe at the dinosaur exhibit. A sign tells her that the Tyrannosaurus Rex...
Physics & Mathematics

Space-time theorems prove a supernatural Agent must've created the universe of space, time, matter, and energy. These theorems are true, however, only if general...
Physics & Mathematics

Two astronomers at the University of Illinois have developed a technique to test the constancy of the laws of physics, a feature that RTB’s...
Physics & Mathematics