It rained on Wednesday—I could tell because I spotted at least five cars stopped along the freeway (and one right in the middle lane). Rain does something to Southern California drivers—it messes with our heads and puts us in a muddle. 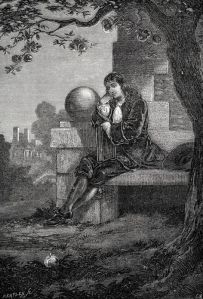 Sir Isaac Newton sitting beneath the apple tree where he was inspired to formulate his theory of gravitation.

Because there is a law such as gravity, the universe can and will create itself from nothing…Spontaneous creation is the reason there is something rather than nothing, why the universe exists, why we exist. It is not necessary to invoke God to light the blue touch paper and set the universe going.

(Hawking will be Larry King’s guest tonight for an interview about his book.)

Naturally, such bold statements provoked a variety of reactions. Some people agreed, others offered up thoughtful challenges, and still others reacted out of anger. Healthy discussion is good—and Hawking’s comments certainly raise a lot of questions—but there’s a difference between saying someone is wrong and declaring that the person should go to Hell. The former is a legitimate challenge, the latter a vitriolic attack.

It seems to me that Christians who respond to challenges with sarcasm or rage are actually reacting out of fear. My adolescent self would have fallen into this group. Looking back on my high school and early college years, I am convinced that my anger toward opposition to my faith stemmed from fear.

Yet if we believe God truly is who He says He is, then why do challenges to our faith make us fearful? The Bible tells us over and over again to be not afraid. God isn’t threatened or surprised by such challenges. He even tells us to expect them! The Gospel is foolishness according to the world’s wisdom. So, of course, people will strive to destroy it.

But a faith founded on truth need never fear questions and challenges. The God revealed in the pages of the Bible never rebuked any humble, authentic question! A major focus of Jesus’ teaching ministry was to open people’s understanding of what was written in the Law and the Prophets….That’s why I encourage questions and urge you to do the same. Even a question for which you and I have only a vague answer or no answer at all is a good question, especially if it moves us to dig deeper for knowledge and understanding.

Remember the old hymn line: “Blessed assurance, Jesus is mine.” When we understand our faith, its tenets, and its evidentiary support, we have the knowledge necessary to dispel fear and help us respectfully address challenges from skeptics.

Resources: Go here, if you’d like to sign up to receive the electronic version of our ministry letter.

RTB joined in on the discussion inspired by Hawking. Listen to Hugh Ross and Jeff Zweerink assess Hawking’s comments on a recent Science News Flash episode.

Tens of thousands of people are affected every day by this latest epidemic: the ironic hipster mustache. What may have begun as nothing more...
Theology

Judging Jesus by His Followers

German philosopher and atheist Friedrich Nietzsche (1844–1900) was the first to proclaim, “God is dead.” Nietzsche holds an important position in the history of...
Theology

No Trinity, No Salvation

Contemporary heretical sects or cults all claim to have the proper theological system to replace historic Christianity as the true heir of biblical revelation.
Theology