This summer is a good one for movie fans, with major blockbusters opening nearly every week. Though most movie-goers don’t walk into action-adventure/superhero films expecting more than spectacular special effects and epic battles, I’ve been pleasantly surprised to find quality storytelling in this season’s fare. 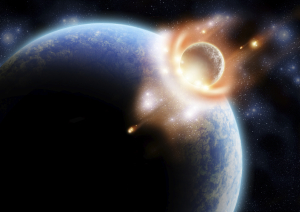 Likewise, one would expect a real-life asteroid pelting to provide little more than awesome explosions and destructive chaos. But would you be surprised to learn that such events helped make life possible on this little blue planet? Intuition tells us that large and/or copious quantities of impact events would be detrimental to life—but scientific research tells a different story. Such events actually provided essential benefits for Earth’s residents, humans in particular.

Shortly after Earth formed over 4 billion years ago, a Mars-sized object collided with our planet. Rather than obliterating both objects, the impact occurred at the just-right speed and angle to bring about the following positive results.

Between 3.8 and 4.1 billion years ago during the Late Heavy Bombardment (LHB), Earth endured collisions with thousands upon thousands of asteroids and comets. As with the Moon-formation event, the LHB helped prepare Earth to support life.

This may be difficult to process, but research reveals good purposes behind the collisions that likely wiped out the dinosaurs as well.

Emotionally, it’s sometimes hard for us to grasp how God could use destructive events for good. Yet, in addition to the benefits mentioned above, asteroids and comets are responsible for delivering many of the metals and nutrients and much of the water necessary for life to survive and flourish on Earth. Without these collisions, we wouldn’t be here.

Like blockbusters with engaging stories, there’s more to impact events than meets the eye.

Resources: In Why the Universe Is the Way It Is, astronomer Hugh Ross provides great insight into God’s possible purposes in designing our universe the way he did. Hear the book’s highlights on the free companion podcast. For a lay-friendly approach to God’s purpose in design, check out the Impact Events study guide series by astrophysicist Jeff Zweerink and Ken Hultgren.

How about you? What makes your list of must-see movies this season?

Considering all the money raked in from alien- and UFO-themed blockbusters, the market for them has indeed been huge. And year after year the...

Last week on RTB’s official Facebook page we invited people to share some of the science-faith questions their kids ask. Soon, questions poured in....
Design