It’s a warm summer night on a small east coast island. A young woman goes for a swim in the bay, relishing the coolness of the water. Just as she reaches a buoy something jerks her down, once, twice. Then, in an instant she’s trapped in the nightmare of a violent shark attack. Her final screams are silenced as the beast pulls her under.

This scene, the opening from Jaws, topped the list on Bravo TV’s 2004 The 100 Scariest Movie Moments. Indeed, the 1975 horror classic’s lasting cultural impact continues to fuel our fascination with (and fear of) the ocean’s top predators. This week Discovery Channel aired its 22nd season of Shark Week, featuring unnerving reenactments of the 1916 Jersey Shore attacks that supposedly inspired Jaws. (For a funny 30-second synopsis of the film, see here.) 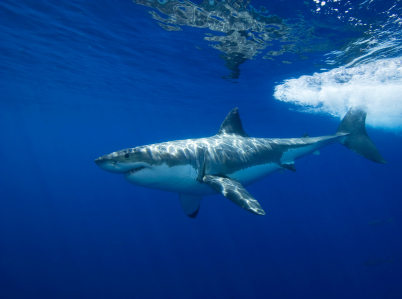 Great white sharks in particular seem to persistently intrigue people. They represent one of the most frightening examples of animal aggression. Unlike lions or tigers, great whites remain untamable. They are unabashedly wild and violent—swift, powerful, and chillingly soulless.

But did these apex predators evolve to become the ocean’s top fish or did God design them that way? Have they always been carnivores—or did they develop a taste for meat after Adam’s fall?

Fossil records place the origin of many modern shark species at around 100 million years ago. Modern great whites (Carcharodon carcharias) clock in at about 11 million years old.

According to ReefQuest Centre for Shark Research, ancient specimens underwent “adaptive radiations” defined as “a spectacular flowering of diversity” following mass extinction events. The folks at ReefQuest attribute these rapid developments in shark species to evolution.

Here at RTB we see such events as evidence for the work of a Creator. Psalm 104:28–30 tells us that God alternately wiped out groups of animals and then created new breeds and species. RTB biochemist Fuz Rana has pointed out that like any human engineer, God probably reused certain designs and improved on them as creation progressed to the state we see today (see here and here). This includes sharks.

Furthermore, with thousands of cataloged shark species to dig through, constructing a coherent evolutionary family tree for Jaws and friends is very difficult. ReefQuest notes that, in regards to lamnoid sharks (the order to which great whites belong),

“[With] only teeth to go on—no matter how beautifully preserved—it is extremely difficult to trace the evolutionary history of lamnoids. As a result, we often have more theories than we do specimens.”

Young-earth creationists take God’s description of pre-fall creation as “good” and “very good” to mean, among other things, that animal death did not occur prior to humanity’s fall. Thus, predators, such as sharks, would have presumably been herbivores.

Answers in Genesis–USA’s CEO Ken Ham makes it very clear that originally—according to his interpretation of Scripture—God did not create hunters. Ham admits that they are still uncertain as to how meat-eaters became meat-eating. (Other articles on the organization’s website note that sharks are “magnificent animals” that play vital roles in this fallen world’s oceanic ecosystems.)

Kent Hovind, founder of Creation Science Evangelism, also contends that there was no animal death prior to the fall. This issue stands as one of the biggest points of disagreement between Hovind and RTB. Hovind argues that “death before sin would nullify the need for the death of Christ.”

Evidence for the Creator

As an old-earth organization, RTB regards all animals, including sharks, as God’s purposefully designed creatures and believes that sharks have always been predatory. God expertly crafted them to fulfill vital roles in their habitat. Experiments have shown that without predators to balance the herbivore population ecosystems cannot be sustained for long.

As ichthyologist Matt Hooper explains in Jaws, the sleek kings of the seas are perfectly engineered to “swim and eat and make little sharks.”

Carnivores may clash with the popular human concept of a blissfully safe and comfortable Eden; nevertheless, we hold that all carnivores were included when God pronounced creation as “very good.” In Job 38:39–40, God says he delivers prey into lions’ paws. Later in chapter 41, He extols the merits of the leviathan (thought to be a crocodile), even though it is obviously a violent fearsome animal. Psalm 104:20–21; reiterates the image of God feeding the king of beasts. The Lord even identifies with predatory animals. Revelation 5:5; declares Jesus the triumphant “Lion of the tribe of Judah.” 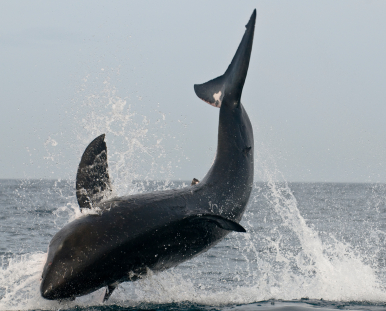 As much as we might dislike seeing a great white chomp down on a seal, its behavior is in no way sinful or evil. God certainly must like sharks because He made 2,000–3,000 of them, only a thousand of which still cruise the oceans today. Metaphorically speaking, these animals’ very wildness tells us something about God. He, also, is untamable and mysterious.

Evidence That Humans Are Evolving Is Not Evidence for Human Evolution

Conversation—perhaps more than ever—seems the key to effective evangelism and equipping today, especially among young people. Have you noticed this change? We’re convinced the...