Eager students lingered on the dimly lit dance floor waiting for their next cue. “Please take a partner for tango,” the teacher instructed. I snuck over to the water cooler to quench my desire to remain unnoticed. But my clever efforts were thwarted by an ambitious and thirsty dancer.

After a quick swig of water I faltered forward. Soon my partner and I were fidgeting and fighting our way along the line of dance. He took small steps and moved faster than the tempo suggested. I struggled against both, hoping he would follow my direction. Then I remembered an essential element of ballroom dance: leading and following.

Following. Ah. That was my job. It was his to “communicate” the next dance move. All I had to do was stay on my toes, so to speak, and respond to his cues. Speaking of said toes, if I hoped to protect them I also had to—above all—avoid “backleading,” that is, anticipating what his next move was going to be. It also meant I couldn’t attempt to correct him, but instead had to adapt my stride to match his. 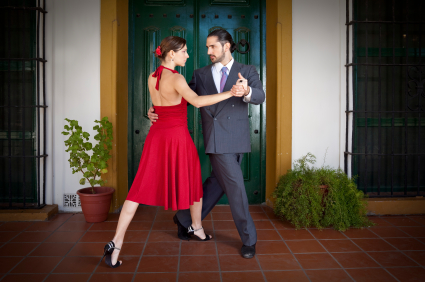 In my first few years as a Christian, I found myself partnered in verbal tangos with both skeptics and believers, and just like in the dance studio, I had plenty of missteps along the way. Being essentially “unchurched” for the better part of my life left me ill-equipped to do much more than be a disengaged wallflower or an inarticulate, two-left-footed oaf.

Hanging around the scholars at RTB for nearly nine years has thankfully provided ample training on how to engage in rational dialogue, whether it’s on the age of the earth, the image of God, or who the better performer is (Paul McCartney or Michael Jackson).

Although some of the topics are too complex for me to contribute toward, I can still apply the ballroom lessons I’ve learned—especially the one about not anticipating.

Kenneth Samples may not be known for his dancing skills (though he insists he has them); nonetheless he offers some lessons of his own to help develop shy, would-be klutzes into budding apologists.

“When I’m in the midst of a truly heated dialogue…I’m thinking about what to say next once he or she stops talking (in order to stay ahead in the debate). Yet I have discovered an application of the Golden Rule that often helps when engaged in such a debate where you and your antagonist seem to be moving in different conceptual directions….I stop, take a breath, listen carefully to my opponent and then seek to accurately repeat his argument back to him.”

Even in casual conversations it’s difficult to listen without thinking of what to say next. I have yet to master that art—especially if someone is arguing against something I’m passionate about. But it’s in those discussions where we especially need to dial down the gusto. We may not always end up with a cooperative partner in the science-faith tango, but at the very least we can strive to be graceful.

“In life, as in dance, grace guides our blistered feet.”

For technique on how to develop and test a worldview perspective, check out Kenneth Samples’ book A World of Difference chapters 1, 2, and 16. Also check out the Straight Thinking podcast, specifically:

Research into the diversity of influences on climate strengthens the case for a superintelligent Designer preparing Earth as a stable habitat for life. Most...

Knocking on the Door: Discussions with Jehovah’s Witnesses

The idea for this week’s blog literally knocked on my door in the form of two Jehovah’s Witnesses. I didn’t pause to chat with...

Whether it’s through email, snail mail, or Facebook comments, we receive all manner of science-faith questions (and challenges). Yet some topics—such as dinosaurs,...