In describing the process of writing The Screwtape Letters, C. S. Lewis said, “I never wrote with less enjoyment . . . The work into which I had to project myself while I spoke through Screwtape was all dust, grit, thirst, and itch.” Nevertheless, Lewis’ book of diabolical epistles remains one of his most popular works, as Fellowship for the Performing Arts’ successful and highly praised stage adaption proves. 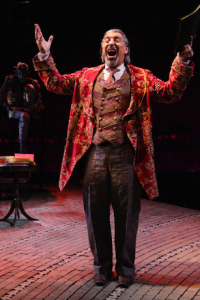 Starring Max McLean as the eponymous demon, The Screwtape Letters opened off-Broadway in New York City in 2006 and has continued to play to sold-out theatres across the country. I had the opportunity last Saturday to attend a performance at the Alex Theatre in Glendale. Having never read the book (not for long!), I entered the theatre with fresh ears. The glowing reviews tell the truth: this is a wonderful production.

Dressed in a garish smoking jacket, Screwtape paces about his macabre office discussing various techniques of temptation in letters to his nephew Wormwood, a junior tempter eager to lure his first “patient” down the road to Hell, where the demons wait to feast on the human’s soul. Toadpipe, a nimble but mute fiend, takes down dictation. The play is, essentially, a 90-minute monologue, but it’s never boring. McLean delivers a powerful performance, at times witty, at other times repulsive, but always riveting.

It’s surprising how relevant Lewis’ work remains more than 50 years after its publication. Writing from the demonic point of view brings to light, albeit somewhat humorously, the seriousness of spiritual warfare. Satan and his hordes hate humans and hunger for their destruction. Science News Flash,

The apostle Paul strongly warns us to avoid that [astrology and other forms of ‘secret knowledge’] because the only way it can have any reality is if you’ve got a demonic connection. There are beings out there that are more powerful than we; there are beings out there that are not subject to the space-time limitations of the universe. So they can do things in your life that look really amazing. But it’s not reliable…Their motive is to guide you away from the real truth and away from the real One who will save you for the rest of eternity.

Satan can make vices and sin look so attractive, even laudable. The thing I love about Lewis is his ability, throughout his fiction works, to strip away the allure to show what Hell really offers. At one point in the performance, Screwtape preaches demonic propaganda, his voice rising until he is nearly screaming, “An ever-increasing craving for an ever-diminishing pleasure is the formula. It’s more certain, it’s better style to get the man’s soul and give him nothing in return!”

Christ understood this deceptive ploy when the devil tempted him in the desert. Though Satan offered him rewards that would make most human mouths water, Jesus saw their worthlessness in light of eternity and rejected them. God promises help in resisting temptation. Paul reminds us of God’s faithfulness in 1 Corinthians 10:13, “he will not let you be temptedbeyond what you can bear. But when you are tempted, he will also provide a way out so that you can endure it.”

And fortunately, for those moments of weakness, there is also forgiveness.

Check out the website for The Screwtape Letters for tour dates. If you have a chance to see it, go!

Resources: Hugh addresses the serious dangers of demonic influence in the book Lights in the Sky and Little Green Men (coauthored by Ken Samples and Mark Clark).

By day, climatologist Kevin Birdwell seeks answers to mysteries of human history via climatological records. By night, he uses that research to enhance his...
Geology & Earth

How Can Christians Uphold the Law and Maintain Their Convictions?

Law and morality are distinct from one another. This difference is apparent when societies evaluate laws to see if they’re moral. Some laws are...