The following interview article was featured in 2005 summer edition of Biola Magazine (reprinted with permission).

What Should Every Christian Know About UFOs? 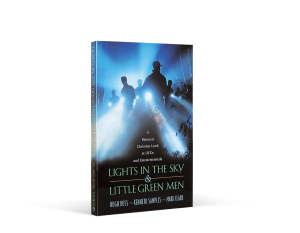 Cultural fascination with UFOs has taken off. A 1996 Gallup Poll found that half of Americans believe UFOs are real, and 12 percent claim to have witnessed a UFO. Worldwide, UFO experts estimate millions of alleged sightings in the past 40 years. For a Christian perspective on this phenomenon, Biola Connections interviewed Kenneth Samples, coauthor of Lights in the Sky and Little Green Men: A Rational Christian Look at UFOs and Extraterrestrials (NavPress).

How did the UFO phenomenon begin?
During World War II, Allied and Axis pilots reported observing unexplained aerial phenomena. In 1947, a private pilot in the United States reported observing several saucer-shaped disks traveling at incredible speed. By the 1950s, a national craze began, with many people reporting sightings. The U.S. government launched investigations to find out if the UFOs were advanced Soviet aircraft. Since the mid-1960s, people have claimed having encounters with alien beings who pilot UFOs. Many of these alleged encounters have included accounts of being abducted by aliens and receiving religious messages to deliver to humankind. For this reason, the UFO phenomenon has become mostly a religious one. UFO religions have an occult ancestry and engage in occult practices.

Are UFO reports credible?
While this phenomenon definitely attracts strange folks, some credible UFO experts (ufologists) believe UFOs are real, such as the late J. Allen Hynek, co-founder of the Center for UFO Studies, and Jacques Vallée, a French astrophysicist. Among the most credible ufologists, there is a general consensus that 90 to 95 percent of reported UFO sightings have a natural explanation (natural phenomena, human phenomena, hoaxes, and subjective psychological states). The remaining 5 to 10 percent of cases defy a clear naturalistic explanation and may be called “RUFOs” (residual UFOs). If only 1 percent of UFO sightings are RUFOs, then there have been at least tens of thousands of unexplained sightings in the past 40 years. 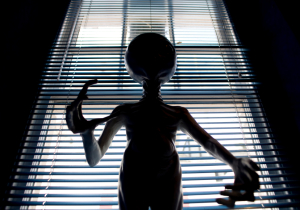 What are RUFOs believed to be?
There are three general hypotheses. First, UFO skeptics affirm the “Misidentified Hypothesis.” They believe all UFOs are merely natural phenomena—the RUFOs are just yet to be explained. However, this view presumes what it should prove and, therefore, fails to account for all the data. Some UFO reports consistently defy purely naturalistic explanations, even when examined by the most objective researchers.

Second, the most popular theory—the “Extraterrestrial Hypothesis”—proposes that RUFOs are metallic spacecrafts that are piloted by interplanetary space visitors. These aliens represent what is thought to be a vastly advanced civilization that is studying mankind and will eventually make contact. But—due to serious scientific, technological, and logical problems—this theory is rejected by many credible ufologists. For example, it would be physically impossible for spacecraft to travel the vast distances between galaxies in the amount of time available. Also, if RUFOs are physical objects, they could not maneuver in the ways reported—such as making sharp, sudden turns—without violating the laws of physics (which appear to be uniform throughout the universe).

Third, the “Interdimensional Hypothesis” asserts that RUFOs are real and exhibit physical effects, but they actually belong to another dimension of reality beyond our time-space continuum. Some Christian ufologists believe this is a spiritual dimension and UFOs may reflect demonic influence. While this view also has weaknesses, it does seem to be consistent with the reported data (RUFOs) and seems to be compatible with Christian theology. Though this view has explanatory power, one should be cautious in drawing conclusions about the UFO phenomenon.

How should Christians respond to people who are fascinated by UFOs?
First, we need to communicate that the existence of extraterrestrials would not disprove Christianity, even if they were physical beings from another planet (though I seriously doubt this). If extraterrestrials exist, they are creatures made by the sovereign Lord revealed in the Bible. Second, we should explain the religious—possibly demonic—nature of UFOs. Finally, we should stress that historic Christianity provides powerful and livable answers to life’s ultimate questions, and those answers are more convincing than anything UFO religions can provide.

A Targeted Search for Extraterrestrial Intelligence Found Nothing, Part 1

The goal of NASA’s Kepler satellite mission is to find planets that could host extraterrestrial life and possibly even intelligent life. Hundreds of “Kepler...
Extraterrestrials & UFOs

Why We Need to Return to the Moon

I vividly recall sitting up all night with a dozen other astronomy students as we watched live on television the first men walk on...
Chemistry