This current blog series on Reflections is intended to encourage Christians to read more vigorously by providing a beginner’s guide to some of the Christian classics in such fields as theology, philosophy, and apologetics. Hopefully, a very brief introduction to these important Christian texts will motivate today’s believers, as St. Augustine was called to in his dramatic conversion to Christianity, to “take up and read” (Latin: Tolle lege) these classic books. 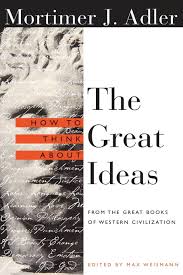 This week’s book is not a Christian classic but rather a contemporary classic on the history of ideas of Western civilization. How to Think about the Great Ideas by Mortimer J. Adler reflects a select number of profound ideas taken from Encyclopaedia Britannica’s Great Books of the Western World series. This volume thus reflects a brief introduction to some of the most important ideas to shape Western culture and society.

Mortimer J. Adler (1902–2001) was arguably the most educated person of the twentieth century. An American educator, philosopher, and best-selling author, he was associated with both Columbia University and the University of Chicago. He also served as an editor of the Encyclopaedia Britannica as well as cofounded the Great Books of the Western World series. In his long career, he authored more than 50 scholarly and popular books. In 1990 Adler cofounded the Center for the Study of The Great Ideas with Max Weismann.

In 1952 Encyclopaedia Britannica published a 54-volume set entitled Great Books of the Western World. Two volumes in that series were entitled A Syntopicon: An Index to the Great Ideas and identified 102 great ideas of the Western intellectual tradition. These ideas, which covered a historical period between Homer and Freud, were catalogued by Adler with the help of educator Robert Hutchins. The book How to Think about the Great Ideas takes 52 of those enduring concepts and briefly introduces them to today’s readers.

Some of the topics addressed in the book include how to think about such enduring ideas as truth, freedom, democracy, justice, beauty, education, and government. Yet other provocative topics are also addressed, such as opinion, emotion, love, sex, evil, art, science, and God. In most articles on the great ideas, Lloyd Luckman dialogues with Mortimer Adler, asking questions that serve to focus the topic at hand.

In introducing the book, Mortimer Adler talks about the importance of philosophical reflection through using the great ideas:

It cannot be too often repeated that philosophy is everybody’s business. To be a human being is to be endowed with the proclivity to philosophize. To some degree we all engage in philosophical thought in the course of our daily lives. Acknowledging this is not enough. It is also necessary to understand why this is so and what philosophy’s business is. The answer, in a word, is ideas. In two words, it is Great Ideas—the ideas basic and indispensable to understanding ourselves, our society, and the world in which we live.1

This very informative and rich volume can be read in two different ways. It can serve as a general topical study of the broad history of ideas. Or it can also be read selectively, where certain topics are identified and focused upon. Since it deals with 52 great ideas, one article could be read each week, which allows enough time for reflection and would allow the reader to complete reading the book in one year. This is an ideal work for someone who wants to pursue the life of the mind by considering the most meaningful ideas of life.

Take Up and Read: More Than a Carpenter

On my Facebook and Twitter pages I have implemented a weekly segment called #WednesdayWisdom, where I provide quotes from significant scholars from various disciplines....
Education

Scripture declares that human beings are made in the expressed image of God (Gen. 1:26-27) and therefore possess unique, profound rational capacities.
Education