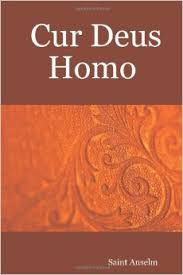 This week’s book, Cur Deus Homo (Latin for “Why the God-Man?”), by St. Anselm is considered one of the most important works of philosophical theology in Christian church history. Anselm’s book seeks to provide a rational explanation for one of Christianity’s most important and mysterious truth-claims.

St. Anselm of Canterbury (1033–1109) is honored as a Doctor of the Catholic Church and has been recognized as the greatest Christian thinker between St. Augustine and St. Thomas Aquinas. He is well known for his understanding of the relationship between faith and reason and for formulating one of the most distinctive arguments ever for the existence of God—the ontological argument. For more about him and his accomplishments, see my article “Christian Thinkers 101: A Crash Course on St. Anselm.”

Cur Deus Homo is a work of philosophical theology in which St. Anselm attempts to provide an explanation for possibly the greatest Christian mystery of all, for as the Latin title asks, “Why the God-Man?” Thus, Anselm lays out a broad theological theory for why it was necessary for God to become man in Jesus Christ and for the Son of God to suffer. This is then a rational defense of the necessity of the incarnation in light of the atonement.

Divided into 22 chapters, Cur Deus Homo consists of a dialogue between Anselm and Boso, a fellow monk and colleague who takes the role of the questioner and infidel (unbeliever). Through this dynamic philosophical-theological exchange, Anselm sketches out the following explanation and defense of Christ’s identity and work.

While humankind was specifically created to love and serve their Creator, their sin has injured God’s honor. Thus, some form of satisfaction to restore God’s honor is required. However, because God is an infinite being, the dishonor reflects an infinite debt. Thus, the problem is that while the payment must be accomplished by humankind who transgressed against God, it is clearly beyond the capacity of mere human beings to repay.

Anselm’s theological conclusion is that only the God-Man (Jesus Christ as a single person with both a divine and a human nature) can make the necessary payment to restore God’s honor and humankind’s relationship with God. Because Jesus Christ is God, he has the dignity and glory to carry out the task, but it is performed in the nature of a human being. Thus, the incarnate Christ appeases God’s honor and justice.

Therefore have we clearly found that Christ, whom we confess to be both God and man, died for us; and, when this is known beyond all doubt, all things which he says of himself must be acknowledged as true.1

Cur Deus Homo is considered a philosophical and theological classic written by one of Christianity’s greatest medieval thinkers. It offers a broad rationale for Jesus’s unique identity and work of salvation. While different in theological orientation from both the earlier church fathers and later Protestant Reformers, Anselm’s satisfaction theory is a bold and insightful defense of the faith.

Whether or not one agrees with all of St. Anselm’s doctrinal conclusions, his intuition that the incarnation makes the atonement possible makes this book a timeless philosophical and theological treasure.

I recommend this edition of Cur Deus Homo for further reading.

Is TV Bad, Good, or Neither?

A ninety-plus degree day, an inadequate ladder, shorts instead of jeans, and a non-English or even Spanish-speaking person to spot me on the ladder...
Education

Walter Martin was one of the most distinctive Christian apologists of the twentieth century, but what exactly did he believe and what did he...
Education

How Can I Help My Child Become a Research Scientist?

Some children are naturally curious about science and want to become scientists. What can parents do to sustain that curiosity and equip children to...
Education