I was somewhat reticent to see the newest superhero movie Captain America: The First Avenger (released July 22, 2011). Why? Because Captain America was my favorite superhero as a kid and it seems that few contemporary remakes do justice to one’s childhood memories. 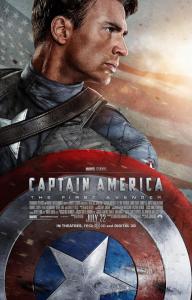 Nevertheless, I saw the movie on opening day and liked it. It’s faithful to Captain America’s World War II context and contains plenty of military action and adventure. It also presents Captain America as the fearless patriot I remember him as. I therefore give the movie a solid 9 out of 10 rating.

Captain America and the Five Problems of Ethics

In part one of this series, I introduced what philosophers call “The Five Problems of Ethics.” What follows is my attempt to answer these philosophical inquiries from the vantage point of the superhero Captain America. I readily admit that some of my conclusions are a bit speculative in nature. I’m attempting to read between the lines and, in effect, look through Captain America’s worldview lens.

2. What is the greatest good?

To my knowledge, Captain America doesn’t talk about God per se. But since he represents the apex of American beliefs and values, I will draw the inference that he would agree with the providential statement that appears on American coins: “In God We Trust.”

Generally speaking, Americans believe that a divine creator grants their right to life, liberty, and the pursuit of happiness. Thus Captain America’s worldview, being deeply shaped by America’s vision and values, discovers its ultimate good in God almighty. However, believing in the generic creator of American natural religion (see the Declaration of Independence) is a long way from affirming the Triune God of the Bible (Father, Son, and Holy Spirit).

3. How is the greatest good known?

Again reading between the lines, I would assert that Captain America’s world-and-life view likely discovers the greatest good (in this case, God) through the deliverances of reason and intuition, which are grounded in the broader created order. However, Captain America never seems to mention the special form of divine revelation that Christians refer to as sacred Scripture (the Bible).

4. What motivates and restrains moral choices?

One of the things that I most appreciate about Captain America is his deep-seated sense of moral duty. As the ideal representative of American beliefs and values, this superhero is both motivated and restrained by his awareness of moral obligation. Of course, moral duties and obligations must be grounded in a truly objective ethical system. And for most Americans, the surest foundation for ethical values is found in the God of biblical theism.

5. Do human beings possess the freedom of the will?

The worldview reflected in Captain America and earlier comic books clearly reflects an affirmation of human freedom. In fact, human beings must ultimately decide whether they will join with the powers of good or align with evil forces. Freedom then carries with it great moral responsibility.

As I mentioned in part one, my attachment to Captain America is tied to my deep belief in basic American values (self-determination, personal responsibility, and justice).

I suggest that you go see the new movie and see if my assessment of Captain America’s worldview is indeed accurate.

In addition to blog posts, I also address Christian worldview issues and critical thinking on a couple of RTB podcasts. Straight Thinking, my primary...
Worldviews

There are five very important philosophical-apologetics terms in the New Testament that every Christian should have some familiarity with. Learning and appreciating these key...
Logic & Reason