Christmas is by far my favorite time of year. I never tire of hearing the incredible message that the Son of God took a human nature and became the God-man at his Incarnation (Philippians 2:5–11). But this past December, just as I was finishing up last-minute editing on my new book and planning much needed vacation and holiday time with my family, I was unexpectedly called to jury duty. 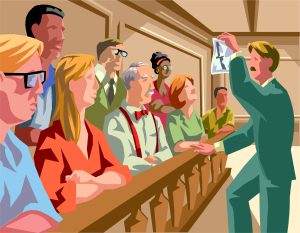 For most of my work life I have viewed jury duty as merely an inconvenience (i. e., unproductive time away from work and family). And, sure enough, reporting for jury duty this time meant that I would miss Reasons To Believe’s annual Christmas party. (This was especially difficult since at RTB, unlike Fuz Rana, my outgoing, bubbly personality makes me the life of the party!)

On the first morning of jury duty I sat in a large room with several hundred other people and waited to see if I would be assigned to a jury. Dozens of people randomly selected via computer were excused—and all seemed delighted to get out of serving. My name was not called and so I remained eligible for jury selection.

When combating boredom, I tend to focus my attention on philosophical reflection. And sitting in the courthouse in a hurry-up-and-wait mode gave me ample opportunity to reflect. Hearing the so-called randomly selected names (a group that I coveted to be part of) made me wonder what life would be like if everything were truly random. “Random” can be defined as “having no specific pattern, purpose, or objective.” In contrast, I’ve always taken great comfort in the Christian faith, which teaches that there is a hand of providence that guides my entire life (Psalm 139:16)—even jury duty.

Serving on a Jury

That afternoon I was indeed selected to serve and I found the experience fascinating from both an intellectual and moral standpoint. I appreciated the solemn role of weighing evidence and arguments and contemplating questions of judicial guilt and innocence. Jury duty is a critical right and privilege of the American judicial system. I came to see that my diligent involvement on the jury played an important role in seeing that justice was done in the lives of some fellow citizens. My fellow jurors also gave me the honor of serving as the foreperson during deliberations.

Afterwards, I felt embarrassed by my initial desire to get out of jury service. Yes, the process is often inconvenient, sometimes tedious, and even financially challenging for people who are not compensated for their time away from work. But our country has given us so much to cherish that it’s only natural to give back. My own experience made me realize that I have a moral duty to discharge my civic responsibility.

Acknowledging that I had viewed my civic responsibility in a rather cavalier way was especially regretful for me when I considered my father’s example. I’m sure he at times viewed his service in World War II as being quite inconvenient. His life and the lives of his family had been interrupted by the great and terrible events of the war. He was overseas and away from his wife and children for many months and was wounded in battle. Yet my dad never spoke of his service in World War II as being an inconvenience. As an American patriot, he saw his time as a soldier as part of his duty as a citizen. As in other areas of life, I can only aspire to be like him as a grateful and responsible citizen.

When it comes to contemplating a Christian’s duty before God and country, I recommend theologian David VanDrunen’s book Living in God’s Two Kingdoms: A Biblical Vision for Christianity and Culture.

One reason for our choice of a name for this ministry is that it can, and often does, lead to questions and conversations. That’s...
Theology

I often marvel at the discoveries scientists make and the ingenuity employed in making those discoveries. For example, a year ago on Creation...
Theology

As we draw nearer to the celebration of Christmas, we might take time to reflect on why the birth of Christ is the most...
Theology