SPOILER ALERT (FOR THOSE WHO HAVEN’T READ THE BOOK. Tsk-tsk.)

What does an enemy look like? Take a second to picture it—someone who snarls and gripes, maybe even cuts others down with sharp words. Someone who might deserve getting knocked down a peg or two. 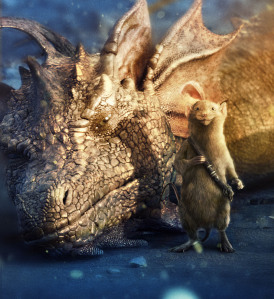 If there were ever a person who could use a hearty serving of humble pie, that person would be “a boy called Eustace Clarence Scrubb.”

In The Voyage of the Dawn Treader, the third film in The Chronicles of Narnia series, we meet this smug little cousin to the Pevensie kids. Tainted “with greedy, dragonish thoughts in his heart,” Eustace eventually becomes a dragon himself. It’s then, in his dreadful condition, that he realizes the gravity of his actions. Soon he longs to “get back among humans and talk and laugh and share things.” To be a monster no more.

But he can’t undragon himself—only Aslan can. Aslan strips away the suit of scales until Eustace is tender and bare.

As the book tells, “from that time forth Eustace was a different boy. To be strictly accurate, he began to be a different boy….The cure had begun.” Aslan’s paw is what began the change in Eustace, but Edmund’s response to him was also significant. When Eustace apologizes for being “pretty beastly,” Edmund not only offers forgiveness but empathy:

That’s all right. Between ourselves, you haven’t been as bad as I was on my first trip to Narnia. You were only an ass, but I was a traitor.

Edmund’s willingness to forgive (no doubt motivated by the forgiveness granted to him) further stripped away the shame of Eustace’s former life. Eustace goes on to become a hero.

It’s not too different from the relationship between Paul and Ananias. Paul (then Saul of Tarsus) was as gnarly as they come. He fervently persecuted those who followed Christ. And when Stephen was stoned to death at the hands of the Sanhedrin, Paul “approved of their killing him.”But, as we know, Paul’s story didn’t end there.

Paul’s conversion began when he heard God’s voice while on the road to Damascus, but it was furthered at the hands of a disciple. Ananias knew Paul’s history. Still, he chose to go against his better judgment and, per God’s instruction, seek out Paul. Ananias’ courageous act helped set Paul on a journey to preach “fearlessly in the name of Jesus.”

In his forthcoming book (tentatively titled Christianity’s Dangerous Ideas), Kenneth Samples tells of how Paul—once the “principle antagonist of the primitive Christian church”—became “the greatest protagonist of the new-found Christian faith.”

The transformation stories of Eustace and Paul might be similar to our own—as former dragons who tossed our scaly claws in the air and surrendered to the Savior of this world. Some of us are farther along in our transformation than others. How do we respond, then, when we encounter newly healed dragons?

What’s fascinating is that even though we may know each other’s history, we can choose to be like Edmund and Ananias. Because of the grace we’ve received, we’re able to extend that grace to others and walk or come alongside them on their journey.

Speaking of going against better judgment, if you were among those disappointed by the first two films, don’t let that dissuade you from seeing The Voyage of the Dawn Treader. The character of Eustace (portrayed by Will Poulter) couldn’t have been more brilliantly cast. And, though Aslan’s onscreen time is brief, it’s powerful. Definitely worth the price of admission—even for an IMAX ticket.

Check out Narnia Faith for a variety of resources to help people “come to know Aslan by another name.”

In his classic story A Christmas Carol, Charles Dickens describes the Advent season as “a good time; a kind, forgiving, charitable, pleasant time.” At RTB,...
Theology

12 Evidences for the Resurrection of Jesus, Part 1

Not of this World: Independence Day Reflections

Popular Christian bumper stickers featuring the letters “NOTW” remind drivers that Christ’s kingdom is “not of this world” and that His followers are “foreigners...
Theology