A few weeks ago a group of our small staff set sail on RTB’s second Alaska Cruise Conference. If you missed the boat, fear not. For the next few weeks, I’ll connect with some of the key players at this year’s conference in hopes of giving us land lubbers a small glimpse of what went down on the ms Zuiderdam. First up is Fazale “Fuz” Rana.

Welcome back from Vancouver, Fuz. How was the trip?

Wonderful. Vancouver and Victoria are beautiful cities. And Alaska is a fantastic place.

The theme for this year’s conference was Future Faith Challenges. You gave two talks while on the cruise. Can you tell me a bit about them?

One was a session on attempts by the scientific community to create life in the lab and what that means for Christianity.

Can you explain what such a breakthrough would mean for the faith?

Sure. Attempts to create life in the lab provide some of the most compelling evidence that life must stem from a Creator. These advances are something Christians can be excited about not only because they provide evidence for a Creator, but because they represent new technology that could positively impact our world.

And your other talk?

I gave a talk on “Common Design v. Common Descent,” looking at the new challenges to the Christian faith that come from the science of genomics.

Given the ongoing debate among evangelicals about the existence of Adam and Eve, did you have an opportunity to discuss this issue in your talk?

Would you please expand on this?

The talk addressed evidence that people claim as “compelling” reasons to believe that humans evolved from an apelike creature. I tried to show how that same evidence can be explained from a Christian perspective. 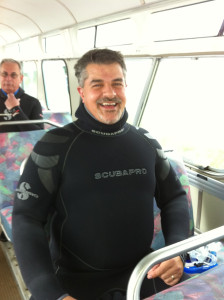 I’m sure the cruise offered plenty of opportunity for you and the other scholars and staff to interact with participants. What were some of the standout moments for you?

I really enjoyed having breakfast and lunch with some of the people who came.

For the food or conversation?

Okay, the food was great, but the conversation was even better. It was a great time to connect with supporters of the ministry and even with some folks who are just finding out about RTB. Also, we recorded two episodes of the I Didn’t Know That! podcast. That went well.

Joe mentioned how much he enjoyed Alaska’s grandeur in his blog post. What, for you, was the most memorable part of this trip?

My wife and I, along with Bob and Kathy Clapper and others, went on an amazing excursion—snorkeling in the Pacific Ocean off the Alaska Coast.

And you enjoyed that?

Yeah. It was totally awesome. (laughs) The wetsuits helped.

Speaking of totally awesome, I heard you had a wardrobe malfunction with your shirt during one of the talks. Can you tell us about that?

Let’s just put it this way. Before we even got far out to sea, there was a whale sighting—a large view of blubber.

Well, let’s not leave on that note. Do you have any final comments?

A great time was had by all.

So there you have it—a Fuz’s-eye-view of the Alaska Cruise Conference. Check back in a couple of weeks for more from our other scholars and staff. Also, connect with Fuz, RTB_Official, and Take Two on Facebook. You might find a few cruise pictures there!

‘Til then, ahoy mateys!

Each year, Reasons to Believe produces a plethora of faith-affirming resources—from books to DVDs and beyond—that give people newer insights to the integration of...

A Word About the DaVinci Code

The best-selling novel, The DaVinci Code, is coming to the big screen in May. And it has some big-name talent behind it. Ron Howard...
Theology

Eight years ago, a small group of scholars shocked the world when they announced data that could potentially make unbelievers reconsider their skepticism about...
Theology