“Snakes. Why’d it have to be snakes?” Indiana Jones’ lament in Raiders of the Lost Ark resonates with all fearers of the slithery, scaly, downright scary creatures. Many people view these reptiles as stealthy, cold-blooded killers but perhaps the dirt scrapers suffer from bad press.

RTB biochemist Fuz Rana says that those who have a jones for studying snakes have accrued knowledge that “helps to advance biomedicine in a significant way.” On a recent episode of Science News Flash Fuz discussed research that described how python hearts enlarge (by up to 40 percent) when the snakes consume supersized prey. Rather than the enlargement being cause for alarm, however, the hearts bounce right back to normal size once the pythons digest their colossal feast. The snake’s metabolic response, via the activity of three fatty acids, works in concert with the organ enlargement to ensure the meal passes through the system without incident. 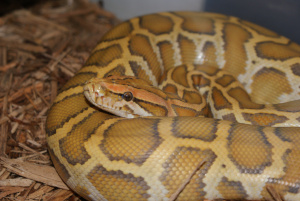 Due to biological similarity—there’s the rub—if researchers can develop a similar “fatty acid cocktail that could be administered to people who are suffering from heart disease,” says Fuz, it may “stimulate biochemical changes that will increase cardiac output [and] improve heart function.”

From an evolutionary perspective, biological similarity provides evidence for the common ancestry of snakes and humans. Fuz says that an evolutionist could argue, “See, this [research] demonstrates the success of the evolutionary paradigm. By looking at life in evolutionary terms we actually have a powerful tool that directs our work and is successful.” In contrast, a creationist mindset will “stultify science and prevent these types of events from happening.” Insistence on a “God did it” posture may thwart the alleviation of human suffering.

However, Fuz notes that this discovery can readily be seen within a creation model framework:

The Creator utilized common design elements when he created life on Earth, therefore there’s a universal nature to the fundamental biology of life. And because of that, what we learn when studying one organism is applicable to another. So that perspective doesn’t necessarily have to stultify scientific advance. In fact, one could argue that for a Creator to create using common designs is a very efficient way to create; it’s an elegant way to create. You would expect the Creator to do this.

Fuz describes how this feature falls under the Christian doctrine of providence: what the Creator creates he also sustains. A common biology marks a very efficient way to learn about the creation and see God’s glory revealed. It also furnishes the knowledge necessary to carry out the command he’s given us as caretakers of the planet. In comprehending the creation, humans are better equipped for this stewardship role. Thus, Christians possess every motivation to pursue scientific advance to the glory of the Creator and the betterment of humanity.

Scripture seems to anticipate such breakthroughs as Job implores his hearers to “ask the animals, and they will teach you” (Job 12:7). It doesn’t necessarily make it easier for some of us to like snakes, but these well-designed creatures may yet teach humans a lesson or two about cardiac health.

Next time you encounter a snake, ask yourself, “Does my heart pump in fear like that of Indiana Jones or does it hum like that of a herpetologist?”

For further “instruction” from the natural realm, read Hugh Ross’ latest book Hidden Treasures in the Book of Job.

Your computer's newest antivirus probably comes with live updates so it can arm itself against the latest trojan-phishing-spyware attack. It may not stop you...
Biochemistry

Does Collagen Provide Evidence for Design?

Collagen is a family of proteins that includes the most abundant protein in our body; this family contributes structural strength to connective tissue in...
Biochemistry

The Nobel Prize, Ribosomes, and Evidence for Intelligent Design

2009 Chemistry Prize Highlights Biochemical Design. In the mid-19th century Alfred Nobel discovered that he could improve the stability of nitroglycerin by mixing it...
Biochemistry