According to Dr. Michael Shermer, popular author, speaker, and founding publisher of Skeptic magazine, the recent Reason Rally (March 24, 2012) in Washington DC “marked the largest gathering of skeptics, atheists, humanists, nonbelievers, and ‘nones’ (those who tick the ‘no religion’ box on surveys) of all stripes.” Shermer noted on his blog that an estimated crowd of 15,000 to 25,000 “voiced its support for reason, science, and skepticism louder than any I have ever heard. Anywhere. Any time. Any place.”

In Shermer’s account of the event, I couldn’t help but notice some phrases that seemed (at least) consistent with RTB’s message. Starting with the words “voiced its support for reason, science, and skepticism,” anyone familiar with RTB knows that our scholar team would heartily welcome support for reason and science, and as for skepticism, Hugh Ross has said that most skeptics are “not skeptical enough.”

Shermer says that he arrived early and mingled with the crowd, noting that he felt the appreciation and love that make “fighting the good fight for science and reason well worth it.” Any Bible reader will see the Pauline expression (Shermer is familiar with the Scriptures) derived from 2 Timothy 4:7. (“I have fought the good fight, I have finished the race, I have kept the faith.”) RTB won’t go so far as to say in any biblical sense that we are “fighting the good fight for science and reason,” but still, that ideal resonates with the team.

MythBusters host Adam Savage garnered enthusiastic approval for his humor and endorsement of science as “the coolest thing one can possibly do.” Shermer gainsaid Savage’s comment that “I’m not a scientist, but I play one on TV” by explaining that “MythBusters are doing science, at least provisionally in testing hypotheses by running experiments over and over and over until they get some result, often not the one they were expecting.”

That line could have been taken out of Hugh Ross’ More Than a Theory, where he enumerates nine sequential tasks of the scientific method that can be marshaled “for explaining the origins and history of the universe, life, and humanity.” Steps six and seven include:

6. Form a tentative explanation, or hypothesis, for how and why things transpired as they did.
7. Test the hypothesis with further experiments or observations.

So, where’s the clash? Here’s where RTB scholars might say that people don’t form their views primarily on reason and evidence alone. Otherwise step eight in Hugh’s scientific investigation method might proceed without incident:

Other factors inevitably play a role in the formation of worldviews. However, as Ken Samples writes in A World of Difference:

“While worldview orientation is usually inherited or adopted from one’s family and culture, it can also be deliberately chosen through reflection and analysis.”

A survey of atheists’ comments online reveals that many came from some type of religious upbringing and then jettisoned the faith after exposure to science and/or reason. Christians can attest to movement in the opposite direction as well, where a person was raised in a nonreligious home and became persuaded of the truth of God’s existence.

How can we at least maintain a cordial dialogue with those with whom we disagree?

As Hugh Ross notes in More Than a Theory (referring to the scientific method):

“When all participants remain committed to following the findings wherever they lead, researchers can work in partnership through failures, successes, and disagreements. Scientists become free to resolve disputes and solve mysteries.”

One can remain optimistic that such will be the case. But if what was observed by some RTB supporters at the Reason Rally as a politicization of the movement—buttressed by Shermer’s hope that the rally would be the “first of many consciousness raising events in the civil rights movement for equal treatment for us nonbelievers and skeptics”—then truth-seeking may suffer.

Although perplexing from an atheistic perspective, perhaps the warmth displayed by one RTB chapter member is exemplary. After a talk by Richard Dawkins RTB apologist Dr. Nick Tavani approached him to thank him for his time and to ask if he could sign the back of one of RTB’s iAsk cards, which Tavani and the team distributed generously (accompanied by conversations) to rallygoers. As Dawkins signed the card, Tavani said “Jesus loves you and so do we. God bless you.” Great reminder for all that the battle for ideas is nota battle against people. Human beings deserve respect and a loving attitude can be a formidable force in winning minds to ultimate truth. 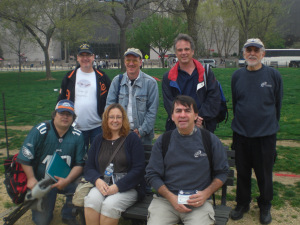 A Movie to Make You Think: The Two Popes

The great Yale church historian Jaroslav Pelikan once called the Roman Catholic Church ʺthe most formidable religious institution in the history of America and...
People

Evolution as Mythology, Part 2 (of 5): Evolution is not a Scientific Theory

Why is it that two people can look at the same world event and come to fundamentally different conclusions about it? Sometimes the difference...
Worldviews