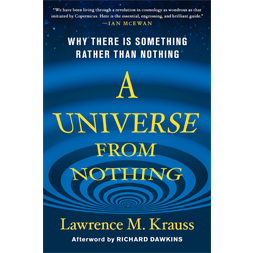 A couple of examples from Andrew Zak Williams’ interview with Krauss:

“I think it is virtually certain that everything we see came from empty space,” Krauss exposited. “And all the physics I know is highly suggestive that our universe popped into existence as a quantum fluctuation.” The book develops this by explaining that because of the laws of quantum mechanics and special relativity, empty space consisted of a bubbling brew of virtual particles spontaneously popping in and out of existence on timescales too small to notice. (It is this behavior that makes them virtual.) This was the “nothing” out of which the universe arose. These bubbling activities, known as quantum fluctuations, caused a mass density fluctuation which, in combination with the process of cosmological inflation, resulted in the big bang.

It seems to me that “empty space,” “quantum fluctuations,” “a bubbling brew of virtual particles,” and “mass density fluctuations” are all “somethings.” I may be an average Joe, but isn’t “nothing,” or “zero energy,” as Krauss posits later, really a “something”? Even “nonexistence” is a concept (thus, a “something”), right? But enough about my issues.

Krauss, on how the universe may have formed from a “purer” form of nothing that does not allow for empty space:

“If, at the very beginning, quantum mechanics was applied to gravity, space and time would have become dynamical and so would have spontaneously appeared. So you wouldn’t have needed pre-existing space. Instead the space itself would have arisen.”

Williams explains that “although there isn’t yet a fully worked out model of quantum gravity, Krauss’ point is that if you apply quantum mechanics to gravity, not only can a universe spontaneously appear from nothing, it must do so.”

And if that notion doesn’t sit well with some people, here’s Krauss’ zinger:

“Some of this bothers people. But who cares? Quantum mechanics is illogical—just get over it.”

Ouch. I wonder what RTB philosopher Ken Samples would say about this statement.

I’ve sat at enough Subway lunches to know that our guys would say something about the laws of physics being a “brute reality” for which scientists need to account.

Here again is Krauss, as related by Williams:

Where did the very laws of nature that Krauss describes come from? After all, some theists may agree with everything Krauss says but then posit God as the creator of the scientific laws that made it all possible. The book answers this question by referring to the possibility of an inflationary multiverse in which the natural laws of any particular baby universe are created spontaneously at the point of its creation.

At first glance, the multiverse theory seems to effectively buttress the human “selection effect” explanation for the fine-tuned appearance of our universe. Yet as research into multiverse scenarios advances, it appears that they may simply move the design “up one level.” In other words, instead of just one universe requiring fine-tuning to support life, it appears that any multiverse-generating mechanism also requires a high degree of fine-tuning to reproduce the observable universe in which we live.

Hugh says something similar in his second critique article:

Where do all the some things come from? A fundamental principle of cause and effect is that effects always come after their causes. Moreover, effects are never greater than their causes. No human has ever seen these principles violated. They actually undergird the entire scientific enterprise.

Consequently, atheism and naturalism are self-defeating in that they demand that the living come from the nonliving, the conscious from that which lacks consciousness, the personal from the impersonal, the mindful from the mindless, the emotional from the emotionless, the willful from that which has no will, and the spiritual from that which is unspiritual. To explain everything that we observe, there must exist a causal Agent beyond the universe that is living, conscious, personal, mindful, emotional, volitional, and spiritual, plus orders of magnitude more intelligent, knowledgeable, powerful, caring, and loving than any human. The God of the Bible fits this description exactly.

Dawkins’ Book Alongside Bible in Hotels?

You've retreated into the solitude of your hotel room after a tiring day of travel and business. More pensive than usual on this occasion,...
Worldviews

After watching ABC's online version of the debate on whether God exists, I realized more than ever the need for an organization like Reasons...
Theology

For me personally, the big bang creation model was a major factor in my becoming a disciple of Jesus Christ. From the time I...
Worldviews