I turned fifty this week. 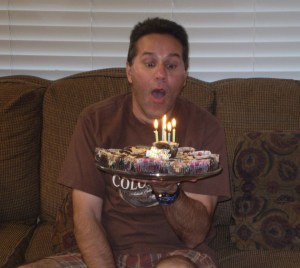 At this age a candle per decade will suffice, thank you.

The decade that just slipped away without asking was the one where people––guys especially––thought they could still do stuff they did in their twenties. Symbolically, if not otherwise, those days appear to be gone for this average Joe. That realization has come in the form of a couple of well-placed recent assaults on the ego.

At Hole-in-the-Rock Park in Phoenix, Arizona, last year I hiked up to the hole (a very easy walk everyone does in five minutes) and then clambered OVER the hole for a king-of-the-hill type of feeling. The chest-beating was short-lived. It’s always easier to climb up than to get down and I suddenly realized I wasn’t twenty-five anymore. I sorta had to slide down on my hindquarters: dagger one to the ego.

The other day when my son Corey and I were shooting hoops in our street basketball system, the ball got stuck between the rim and the backboard. I instinctively made a move toward the garage for a broom. Meanwhile, another kid who had been watching from next door asked if we needed help and sauntered over—he was a few inches taller than me and more than 30 years younger—and not only dislodged the ball, but in one graceful move tipped it in the basket: dagger two.

Aside from such inconsequential barometers, other changes seem more foreboding. I’m waiting for “Mr. Aguirre, it’s just an outpatient procedure.” Or, “Your premiums have changed with your age,” or “your health plan doesn’t cover that.” And already I’m hearing of more funerals than weddings.

Add to this a food intolerance resulting in a daily struggle to avoid headaches and—just to pile it on: a broken toilet, shattered window, nonworking sprinkler system, my wife’s job layoff, few of the gadgets that most middle-class Americans enjoy—fifty doesn’t seem so nifty.

Nevertheless, when my family honored me with a modest celebration the other day, I couldn’t help but think how eager I was to leave behind the forties—not that they were shabby—and look forward to the fifties. Life is built on a succession of memories, and as I explained to my adoring daughter Haley, who interviewed me on a camcorder for the occasion, it only gets better. Without the treasury of memories, what would we have? Who would we be?

I had dreamed of going to Hawaii for the big Five-0, and Haley, 14, in her honeycomb sweetness and knowing our financial straits, had tucked the thought away. Well, for my birthday she pulled out a painting of her and me holding hands on a palm tree beach in Hawaii at sunset that she had taken time to compose. I have it here in my office at RTB, where it will remain for as long as I think it will receive my maximum exposure. I may not ever make it to the Aloha State, but it doesn’t matter, she brought Hawaii to me.

Despite a demanding school schedule, Haley made time to paint and ensured my joy.

Such an act of kindness and love, emanating from a tender human soul—albeit, in balance, one affected by humanity’s fall into sin—served to, in the words of Sam Cooke in another 50s context, “send me.” Naturally, a picture’s worth a thousand words and so much more in this case. That painting—as I now realize—was borne of Haley’s love of the outdoors, made possible by our summer camping trips.

It all makes sense. For vacations (if we’ve been able to afford them), we’ve seldom been able to fly anywhere or stay in hotels. It’s always been summer camping trips—typically in the Sierra Nevada near a lake here in California. It was her way of showing how much she loved me for the price of parchment, ink, glass, and a frame.

I will draw theological insights from that picture for a long time, hopefully well into my fifties. Life’s a party for most Americans compared to much of the world, and yet for all my ill-advised comparisons to the Joneses (or Rodriguezes or Lees or Nguyens), or my hearkening back to the semiphysical exploits of the forties, how many have stable families with a doting daughter who can provide a glimpse of our Creator’s love?

In one sense we are all average Joes. A “mass of damnation” as St. Augustine referred to humanity in its original state of sin. (Yet also, greatly created in God’s image, but suffering a precipitous fall.) However, through no merit of ours, God has cancelled the debt of sin against many, punished his only Son instead, and given his adopted children an inheritance in his kingdom forever. Why? It’s a mystery, but also a gift to be received by faith and with gratitude.

I get all of that from Haley’s painting. It’s God’s gospel reminder of his promise to save and I trust it will fuel my efforts to serve him.

From reading personal posts on Facebook, I see that for many people, life itself seems to suck the life out of life. People need the message of the gospel from cradle to grave. And for that, I’m grateful that after five decades of life, its renewing, motivating, outward-directed, transforming power never gets old.

Many people view​faith and reason as being at odds with one another. For example, some differentiate faith from reason by asserting that faith merely...
Theology

A Word About the DaVinci Code

The best-selling novel, The DaVinci Code, is coming to the big screen in May. And it has some big-name talent behind it. Ron Howard...
Theology

None of the explanations offered in the accompanying article imply that God randomly selected the life span of early humans or that He simply...
Biochemistry