They say everything’s bigger in Texas. Rather than accuse the fine people of the Lone Star state of lying, perhaps they suffer from never-made-the-trip-to-Alaska-syndrome. It’s a common malady that gets straightened out in a hurry. Where do you want to start? Mountains? Glaciers? Forests? Whales? Grizzlies? Everything’s bigger in Alaska, including the cruise ships that glide elegantly through Alaska’s acclaimed Inside Passage. As a caution, the cruise guest might even emerge bigger if not careful, due to the constant, delectable, sometimes ambrosial food offerings available on the ship. 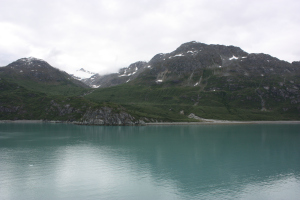 Alaska’s Glacier Bay is at once a place of wonder, serenity, and striking color.

RTB embarked from Vancouver aboard the ms Zuiderdam with some 130 guests for a recent conference that, along with the excellent apologetics talks and camaraderie of seven days with an enthusiastic group, featured one spectacular scene after another. My wife, Käthe, and I both snapped pictures of the same things, over and over. One can’t help it in Alaska. Ask Hugh Ross—he took 2,000 pictures on this trip.

Alaska captivates the mind like few places on Earth. The shapes and sizes of mountains, clouds, and glaciers never cease to fascinate, and the many shore excursions are first-rate. Maybe that’s why so many people go there, and cruising the Inside Passage remains a favorite vacation destination. It’s magical, surreal, otherworldly. And large. 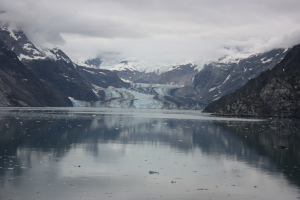 Professional photographers can capture the beauty much better than these photos here, but my eyes feasted while they had the chance. Käthe and I felt like we were in a grand cathedral. Nature seemed to call for a mandatory quiet each day as we cruised through the bays, with the only noise coming from voices on the ship. When a glacier calved (making a thundering noise that echoed through the bay) it was akin to a call to worship. Occasionally a seagull would offer its praise and the high pitch would reverberate off the steep, surround-sound mountains. In the stillness of the morning (or any part of the day) I naturally felt a pull “God-ward.” Why? Am I (and others) wired that way? I was raised Roman Catholic (though rebellious) until the teen years. Is the atheist not wired that way? In recent years it seems that one could find studies to support both hypotheses (that humans are both hard-wired and not hard-wired for religion). Does the atheist see that Alaskan beauty and appreciate it as such but not feel any “silly” religious tugs?

What do you think?

A Christian Perspective on Pagan and Secular Belief Systems

How are Christians to view systems of thought that are rooted in pagan or secular beliefs? Are non-Christian belief systems so filled with error...
Worldviews

Does Nature Today Reveal More or Less about God? Part 1

I get a lot of questions about how effectively science reveals God. One of the most common is, does science reveal more about God...
Worldviews

How Does Islam Differ from Christianity?

According to Pew Research, if current trends continue then by 2050 there will be nine billion people living on the planet. Approximately three billion...
Worldviews