In elementary school I was known in class as Kenny Samples, a quiet and mild-mannered child. But during recess I transformed into my alter ego: Marvel comics superhero Captain America. On the playground of Carver Elementary School I battled daily my archnemesis The Red Skull (believed to be Adolf Hitler’s alter ego). 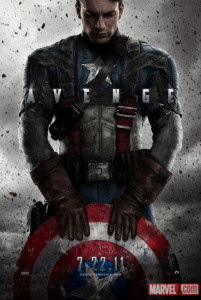 With my “mighty shield” (Captain America’s most powerful weapon), I vanquished the Nazi forces that threatened freedom and democracy. When the forces of Axis evil congregated against me, I called upon my childhood friends Peter Falcioni (a.k.a. Thor) and Paul Goff (a.k.a. Iron Man) to help me win the climactic battle.  (My mother always commented that for a reserved child I had a powerful imagination!)

My father’s participation in World War II as a combat soldier clearly influenced my childhood attachment to Captain America, a WWII era superhero. I’ll never forget as a child seeing the three medals my father received for his service in the bloodiest war in human history. In fact, as a kid I viewed my dad as a real-life Captain America.

Looking back I realize that reading Captain America comic books helped inculcate in me a type of worldview thinking. As a child, my coalescing world-and-life view was more profoundly influenced by my family’s commitment to Catholic Christianity and by our family’s deep respect for what thinker Dennis Prager calls “the trinity of American values” as expressed on American currency: Liberty, E Pluribus Unum (“out of many, one”), and In God We Trust. And the fictional Captain America embodied all those values in a super-human way.

Superheroes and Ethics
In exploring the moral dimension of life, philosophers discuss what is known as “The Five Problems of Ethics.” These powerful interrogatives seek to unveil that which anchors life’s deepest ethical commitments. For what is good (ethics) cannot exist in a metaphysical (relating to reality) and epistemological (relating to truth) vacuum. One’s view of appropriate human conduct has a lot to do with what one thinks about reality and truth. In other words, one’s ethical views are greatly impacted by one’s broader and more comprehensive worldview.

The Five Problems of Ethics:

In part 2 of this series, I will attempt to provide answers drawn from the newest superhero movie, Captain America: The First Avenger (released July 22, 2011). And we’ll see how the latest big-screen version of Captain America corresponds with how I fondly remember him from childhood.

What do you think of this survey? Given that Gallup took two years to make the phone calls and that the number of people...
Worldviews

How to Appreciate Early Jesus Symbols

As someone who calls himself a “historic Christian,” I am very interested in learning as much as I can about the person of Jesus...
History

A “Chocolat”y Perspective on Halloween

The sly wind, in this case, is Halloween. It blows in the faces of Christians, stirring up words like pagan, occult, and chocolate. And...
Worldviews