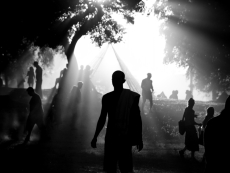 I love zombies. Always have. As kids, my brother (also a big fan of zombies) and I would gurgle lines from classic zombie films and record them as the outgoing message for our answering machine. Our mother was less than thrilled.

Decades later, the zombie fixation hasn’t died. And I’m not alone in this fixation. Zombie books and films are on the rise and have even infiltrated Christian works.* Some may wonder why Christians are eating up such gruesome materials. But, why not?

Our artistic expression does not need to limit itself to explicitly Christian topics. We live in a fallen world, rampant with good and evil. It’s a daily struggle. It’s natural for us, therefore, to consider the dark side of things and to wonder about such things. Yes, even zombies—dark, grim, horrific as they are—need not be removed from a Christian’s consideration. Some people find bizarre images like zombies fascinating. Being aware of this notion can help believers make a connection with those who might think Christians are themselves lifeless for being interested only in church activities.

The way the Bible describes evil people comes close to the picture of a zombie. For example, the book of Jude warns of the “doubly dead” (NASB and NLT) or “twice dead” (ESV), those who “scoff at things they do not understand,” “abandon themselves for the sake of gain,” and “care only for themselves.”

Sin has so deeply penetrated these people that they have become like the walking dead. That should come as no surprise. If sin were personified it would probably look a lot like a zombie. And not the sluggish, looks-like-they-just-rolled-out-of-bed kind, but the swift and cunning, once-human mutants. The kind that are unrelenting and dead set at devouring human life.

In the movies, there are number of ways in which a human (dead or alive) becomes a zombie, including radioactive contamination, illness, or as part of an alien scheme to cause chaos.

But no matter if it’s a dark comedy or gritty horror, the premise of zombie apocalypse stories is the same: avoid contact with the assailants; should you encounter them aim for the head and hope you survive. There’s no hope for the zombies anyway.

In real life, we sometimes encounter the zombies Jude speaks of—those who constantly find fault, follow after their own lusts, and speak arrogantly. They are the walking dead. Sin has destroyed their spiritual life and perhaps even caused them to prey on others. Sometimes the bloodletting is literal but more commonly it’s psychological.

Either way their behavior is downright putrid and nobody—except another zombie—wants to hang out with them because we can’t imagine there being any hope for them.

But some who seem beyond hope may not be there yet. Jude follows (several verses later) with this caveat, “Show mercy to those whose faith is wavering…and show mercy to still others, but do so with great caution, hating the sins that contaminate their lives.”

This is perhaps my favorite part of the book of Jude. Why? Because my faith wavers sometimes, too. Because I grumble and complain. And because I need mercy. We all do.

As grotesque as sin is, we can’t hide from it. We see it every time we look in the mirror or away from the mirror and over our shoulder.

Yet what a tragedy it would be to let others (or ourselves) suffer the same fate as the zombies: giving ourselves over to sin and hopelessness. Whether we’re exhausted from following our own desires or from enduring the effects of others’ ways, there’s always hope. And that saving hope lies in the only One who is able to keep us from falling and to present us before his presence “without fault and with great joy.” Through Jesus, even spiritual zombies have a chance at redemption.

So, dear friends, rather than reach for a shotgun, let’s arm ourselves with the love of God, build each other up in faith, and, as always, enjoy the little things.

“The Physics of Sin,” by Hugh Ross

“A Classical Perspective on ‘The Physics of Sin,” by Krista Bontrager

“Uniqueness of Human Capacity to Express Malice,” by Hugh Ross

“People of the Lie: The Hope for Healing Human Evil,” by M. Scott Peck

*For more brain food on zombies and the Christian faith, see:

Marcus Goodyear’s “Zombies for the Love of God” on The High Calling blogs and his three-part series on Zombie Theology on Good Word Editing.

And, just for fun, check out the cleverly written and deliciously illustrated book “How to Draw Zombies,” by Mike Butkus and Merrie Destefano.

I just finished reading a book that has been on my shelf for some time. It is William Lane Craig’s apologetic for the Christian...
Evolution

To say that the Trinity cannot be understood likewise is imprecise, or at least open to misinterpretation. Trinitarian theologians do not mean to imply...
Theology

My husband and I were browsing in a rock-and-fossil shop when I overheard a woman grumbling about the plaques identifying the fossils as millions...
Theology