In early elementary school I developed distaste for reading. To remedy the situation, my parents bought books suited to my interests—principally, animals. I willingly devoured Zoobooksmagazines, curled up with girl-and-her-horse novels, and thumbed through a well-loved copy of a mammal encyclopedia. Although my literary tastes 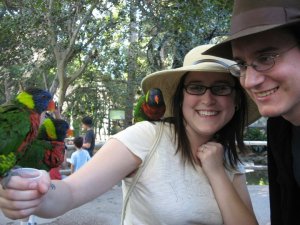 Me and my husband with a trio of feathered friends.

expanded over the years, even today few things will catch my attention faster than an animal.

And it seems the animal kingdom has been garnering some attention in popular science news as well.

Fuz weighed in on this discussion on the December 29, 2011episode of Science News Flash (SNF). He points out that similar extra digits appear in pandas and moles—leading to the conclusion that this is yet another example of convergence, the independent and repetitious appearance of shared characteristics among unrelated organisms.

We would not expect evolution, as a random, unguided process, to be capable of reproducing designs. Yet convergence abounds in nature (echolocation in dolphins and bats is another prominent example). Such instances, Fuz says, better fit within a creation model, where an intelligent Creator makes repeated used of His designs as would a human engineer.

That’s a pretty big impact by itself, but Hugh takes beavers’ importance a step or two further. As a Canadian, he has a special appreciation for the way the beaver fur trade supported his home country’s early economy. However, as an animal lover, Hugh notes that furriers definitely overhunted beavers to the detriment of Canada and America’s wetland ecosystems. He explains that beavers are vital to removing nitrogen from water. Too much nitrogen creates dead spaces where fish cannot flourish. Areas like Chesapeake Bay and the Gulf of Mexico currently face nitrogen’s negative effects. Looks like a restoration of beaver populations may be in order!

The animal is being touted as “evolution in action”—and it is. As Fuz points out on the first SNF of 2012, this shark hybrid is an example of microevolution. Through adaptation and speciation, organisms adjust to changing environments and new challenges in order to survive. The peppered moth and Darwin’s famous Galapagos finches are textbook examples.

So do these types of evolution tip the scales in favor of naturalism? Hardly. Fuz notes that there is a big difference between microevolution and the theory that mindless evolution has the creative capacity to produce radically different animals from previous creatures. Discoveries like the hybrid shark make better sense if a Creator endowed His creations with the ability to adapt.

When God confronts Job, He points to various animals as examples of His power and glory. Indeed, a visit to the zoo, or even a moment with my pet rabbit, always puts me in awe of God. I can see why Paul wrote in Romans that no man is without excuse because the multifaceted natural world so clearly testifies to God’s existence and His character.

Resources: Are you like me and can’t get enough of animals? Check out Hugh’s latest book, Hidden Treasures in the Book of Job, for an intriguing look at how animals point us toward our mutual Creator.

Earth has experienced many tectonic plate collisions throughout its history. By far the most dramatic collision began 50 million years ago and continues to...
Design

What Are the Odds of You Being You?

When anticipating the birth of a child—be it our own or a grandchild, niece or nephew—we might find ourselves contemplating the wonder of human...
Design

Both Christians and skeptics alike expect superior designs to exist throughout nature if, indeed, the all-powerful, all-knowing Creator described in the Bible made the...
Biochemistry